You can find on this page the Bucharest Bus Tour map to print and to download in PDF. The Bucharest sightseeing bus map presents the tourist buses "Hop On Hop Off" and "Big Bus" of Bucharest in Romania.
The best way to discover Bukharest is with Tour Bus. There is a hop on hop off Bucharest City Bus tour operated by STB (Bucharest Transport Company). During the tour, you will see some of the most beautiful boulevards of Bucharest, some traffic jams and some really nice objectives as on Bucharest Bus Tour map.

Bucharest Hop On Hop Off map 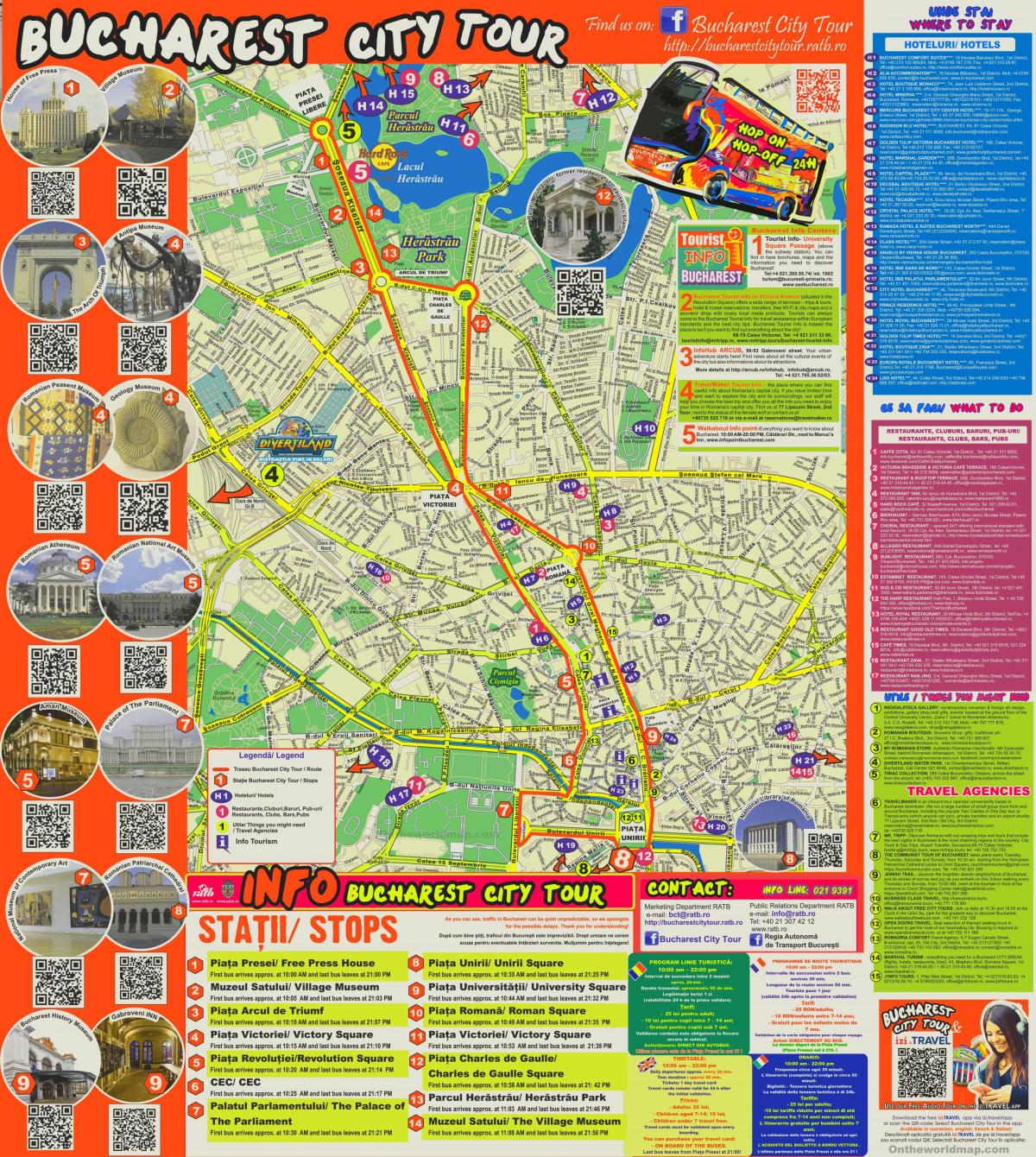 Map of Bucharest Hop On Hop Off

Bucharest is a large city with many interesting sights. For this reason, it can be difficult to see all these places if you only spend 2 days here. In order to get the full Bucharest experience, you should combine two modes of travel: by foot and by bus. Like in other major cities from Europe, there is a Hop On Hop Off sightseeing bus in Bucharest. There are buses going every 20-25 minutes. A full ride takes around 1 hour to complete as its shown in Bucharest Hop On Hop Off map. In case you want to see where all these stops are located in Bucharest, you will find a map in the link from the end of the article. The Hop On Hop Off bus is a very entertaining and quick way of discovering Bucharest for all ages. The open rooftop offers you the opportunity to get a better feel of the city. This ticket is valid 24 hours after being activated. It can be purchased directly on the bus either in cash or by card.

Bucharest Hop On Hop Off bus tour is the perfect way to end a day in the capital city of Romania. If you do not have time to wonder around you can book this tour for a one hour and a half night drive through the city center to discover the most interesting sites and to hear the story of the little Paris. The itinerary of Bucharest Hop On Hop Off bus tour depends on the pick-up point, but it will include: Free Press Square – Herastrau Park – The Arch of Triumph – Kiseleff Boulevard – Victory Square – Peasant Museum – Geological Museum – Government Palace – Victory Road – George Enescu Museum (Cantacuzino Palace) – Revolution Square – Hilton Athenee Palace Hotel – The Athenaeum – Royal Palace (National Museum of Art) – Revolution Memorial – Kretulescu Church – Military Circus – Cismigiu Park – Kogalniceau Square – Opera House – Military Academy – Parliament Palace – Constitution Square – Union Boulevard – Union Square – Coltea Hospital – University Square – Magheru Boulevard – Romana Square as you can see in Bucharest Hop On Hop Off map.