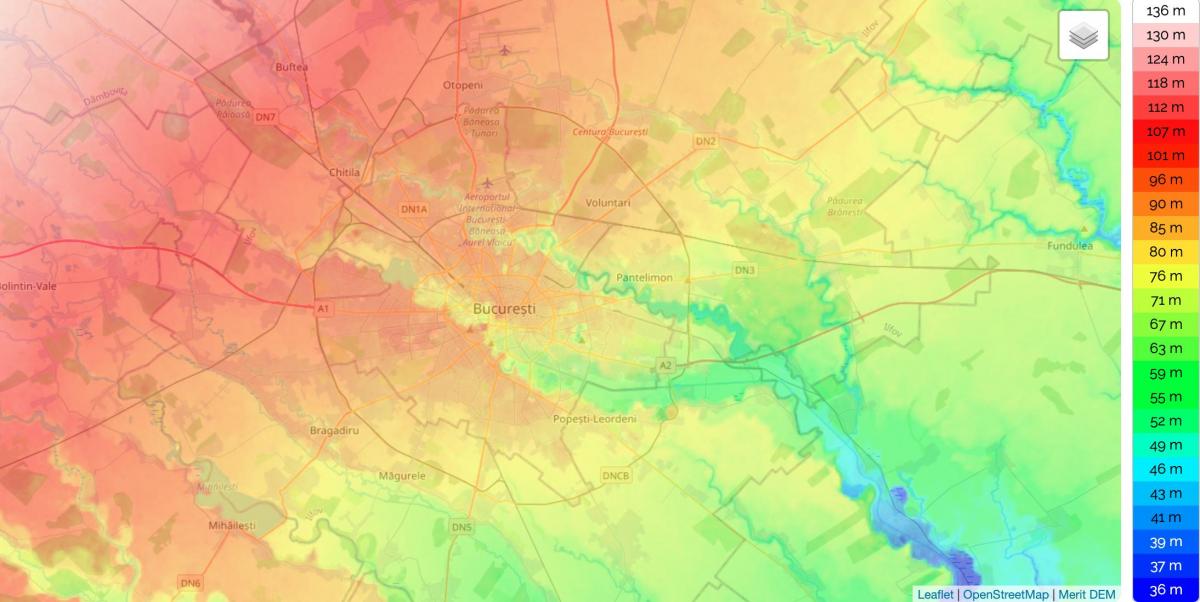 The city has a total area of 226 square kilometres (87 sq mi). The altitude varies from 55.8 metres (183.1 ft) at the Dâmbovița bridge in Cățelu, south-eastern Bucharest and 91.5 m (300.2 ft) at the Militari church as you can see in Bucharest elevation map. The city has a relatively round shape, with the centre situated approximately in the cross-way of the main north-south/east-west axes at University Square. The milestone for Romania Kilometre Zero is placed just south of University Square in front of the New St. George Church (Sfântul Gheorghe Nou) at St. George Square (Piaţa Sfântul Gheorghe). Bucharest radius, from University Square to the city limits in all directions, varies from about 10 to 12 km (6.25–7.5 mi).

Bucharest is situated in the southeastern corner of the Romanian Plain, in an area once covered by the Vlăsiei forest, which, after it was cleared, gave way to a fertile flatland. Bucharest is situated on the banks of the Dâmboviţa River, which flows into the Argeş River, a tributary of the Danube.Bukharest elevation is about 55.8–91.5 m (183.1–300.2 ft) as its shown in Bucharest elevation map. Several lakes – the most important of which are Lake Floreasca, Lake Tei and Lake Colentina – stretch across the city, along the Colentina River, a tributary of the Dâmboviţa. In the center of the capital is a small artificial lake – Lake Cişmigiu – surrounded by the Cişmigiu Gardens.

The history of skyscrapers in the city of Bucharest, Romania capital city and commercial center, began in 1932 with the construction of the 14-story Carlton Bloc which stood at 154 feet as its mentioned in Bucharest elevation map. It held its position as the tallest building in the country until 1934 when the Telephone Palace that stood at 174 feet was completed. During the Communist Regime, Bucharest underwent many construction systemizations that led to the building of the Casa Presei Libere in 1957, therefore making it the tallest highrise at the time at 341 elevation feet high. Today, the Sky Tower is the tallest building in Bucharest and Romania.