In Antiquity, much of the historical territory of Bucharest and Ilfov was covered by the thick forests of Codrii Vlăsiei. The forested area, especially the Colentina and Dâmboviţa valleys, were home to small and scattered settlements as early as the Paleolithic; during the Neolithic, Bucharest saw the presence of the Glina culture, and, before the 19th century BC, was included in areas of the Gumelniţa culture. During the Bronze Age, a third phase of the Glina culture (centered on pastoralism, partly superimposed on the Gumelniţa culture) and, later, the Tei culture evolved on Bucharest soil. In the Iron Age, the area was inhabited by a population identified with the Getae and Dacians (speaking an Indo-European language; the view holding that the two groups were in fact one and the same is disputed, while the culture latter phase can be attributed to the Dacians - small Dacian settlements were found in various places around Bucharest, such as Herăstrău, Radu Vodă, Dămăroaia, Lacul Tei, Pantelimon and Popeşti-Leordeni) as you can see in Bucharest historical map. These populations had commercial links with the Greek cities and the Romans - Ancient Greek coins were found at Lacul Tei and Herăstrău (together with a large amount of local counterfeit ones), and jewels and coins of Roman origin in Giuleşti and Lacul Tei.

According to some researches, the Slavic population was already assimilated before the end of the Dark Ages. According to some researches, the area was part of the First Bulgarian Empire between 681 and c.1000 as its shown in Bucharest historical map. While maintaining commercial links with the Byzantine Empire (as attested by the excavations of 9th-12th century Byzantine coins at various locations), the historical area was subject to the successive invasions of Pechenegs and Cumans and conquered by the Mongols during the 1241 invasion of Europe. It was probably later disputed between the Magyars and Second Bulgarian Empire. According to a legend first attested in the 19th century, the city was founded by a shepherd named Bucur (or, alternatively, a boyar of that same name). Like most of the older cities in Muntenia, its foundation has also been ascribed to the legendary Wallachian prince Radu Negru (in stories first recorded in the 16th century).

Bucharest was first mentioned on September 20, 1459, as one of the residences of Prince Vlad III Dracula. It soon became the preferred summer residence of the princely court - together with Târgovişte, one of the two capitals of Wallachia - and was viewed by contemporaries as the strongest citadel in its country as its mentioned in Bucharest historical map. In 1476, it was sacked by the Moldavian Prince Stephen the Great, but was nonetheless favoured as a residence by most rulers in the immediately following period and was subject to important changes in landscape under Mircea Ciobanul, who build the palace and church in Curtea Veche (the court area), equipped the historical town with a stockade, and took measures to provide Bucharest with fresh water and produce (early 1550s). When Mircea Ciobanul was deposed by the Ottoman Empire (Wallachia overlord) in the spring of 1554, Bucharest was ravaged by Janissary troops; violence again occurred after Mircea returned to the throne and attacked those who had been loyal to Pătraşcu cel Bun (February 1558), during the 1574 conflict between Vintilă and Alexandru II Mircea, and under the rule of Alexandru cel Rău (early 1590s). 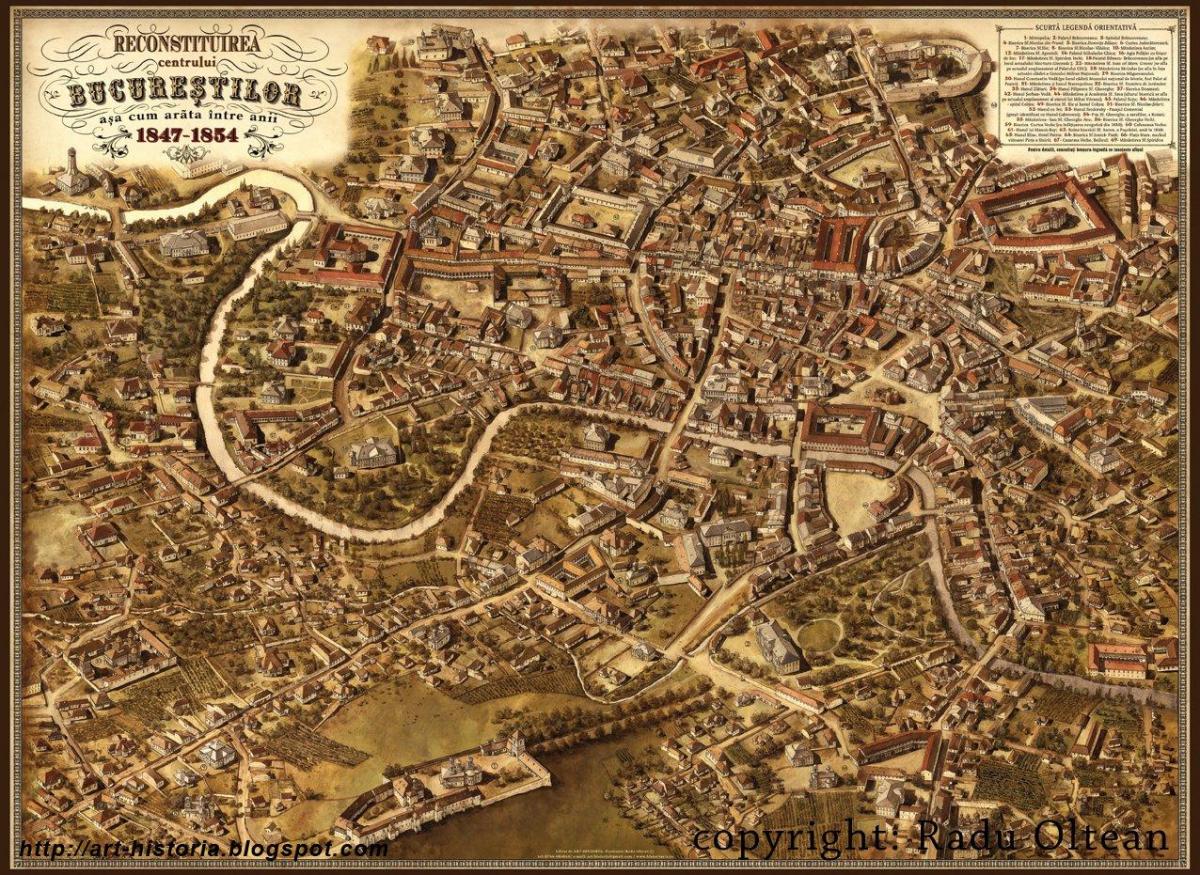 In tune with the increasing demands of the Ottomans and the growing in importance of trade with the Balkans, the political and commercial center of Wallachia began gravitating towards the south; before the end of the 17th century, Bucharest became Wallachia most populous city, and one of the largest ones in this vintage region, while its landscape became cosmopolitan as its shown in Bucharest vintage map. This was, however, accompanied by a drastic decrease in princely authority, and a decline of state resources. On November 13, 1594, the city witnessed widespread violence, upon the start of Michael the Brave uprising against the Ottomans, and the massacre of Ottoman creditors, who held control over Wallachia resources, followed by a clash between Wallachians and the Ottoman troops stationed in Bucharest. In retaliation, Bucharest was attacked and almost completely destroyed by Sinan Pasha forces. It was slowly rebuilt over the following two decades, and again surfaced as a successful competitor to Târgovişte under Radu Mihnea (in the early 1620s). Matei Basarab, who divided his rule between Târgovişte and Bucharest, restored the decaying court buildings (1640).

Bucharest was again ravaged, after only 15 years, by the 1655 rebellion of seimeni mercenaries against the rule of Constantin Şerban - the rebel troops arrested and executed a number of high-ranking boyars, before being crushed by Transylvanian troops in June 1655. Constantin Şerban added important buildings to the vintage landscape of Bucharest, but he was also responsible for a destructive fire which was meant to prevent Mihnea III and his Ottoman allies from taking hold of an intact citadel. According to the traveler Evliya Çelebi, the city was rebuilt as rapidly as it was destroyed: "houses of stone or brick are few and unfortunate, given that their gavur masters rebel once every seven-eight years, and the Turks and [their allies] the Tatars consequently set fire to the city; but the inhabitants, in the space of the same year, restore their small one-storeyed, but sturdy, houses". Bucharest was touched by famine and the bubonic plague in the early 1660s (the plague returned in 1675) as you can see in Bucharest vintage map.

Between Gheorghe Ghica rule (1659–1660) and the end of Ştefan Cantacuzino (1715/1716), Bucharest saw a period of relative peace and prosperity (despite the prolonged rivalry between the Cantacuzino and the Băleni families, followed by worsened relations between the former and the Craioveşti). The climactic moment was reached under Şerban Cantacuzino and Constantin Brâncoveanu, when the vintage city of Bucharest embraced the Renaissance under the original form known as the Brâncovenesc style and was expanded (growing to include the area of Cotroceni), furnished with inns maintained by princes, and given its first educational facilities (the princely Saint Sava College, 1694); Brâncoveanu developed Curtea Veche (which probably accommodated the boyar council in its new version), and added two other palaces, including the one at Mogoşoaia (built in Venetian style and noted for its loggia); this was also the time when the future Calea Victoriei was carved out through Codrii Vlăsiei as its mentioned in Bucharest vintage map.