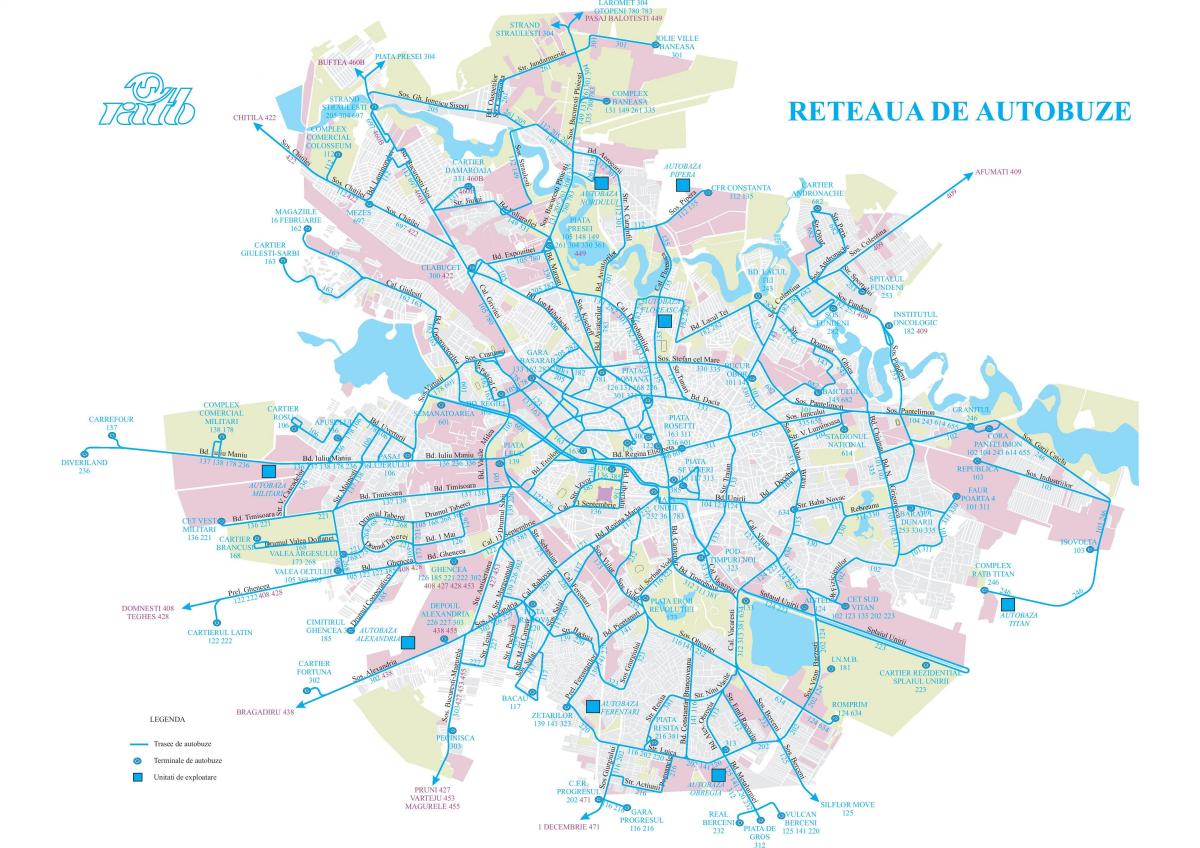 With a total route length of 1,374 km (854 mi) as you can see in Bucharest bus map, the RATB bus network is the most dense out of all the transport types in Bucharest. In fact, RATB advertisements state that one can never be more than five minutes walking distance from a bus stop. There are 121 bus lines, most of which operate in the Municipality of Bucharest. However, there are also a few bus lines which provide services to the towns and villages which border Bucharest, in Ilfov county, and whose populations usually commute to Bucharest for work. In mid-2005, the lines that linked the city to the peripheral area were licensed out to independent transportation providers, but in early 2006, they were placed once again under the control of RATB due to a wide range customer complaints about the private operators.

RATB bus fleet is made up of more than 1450 vehicles, of which around 68% are wheelchair-accessible ( low floor ) and around 34% are air-conditioned. It is important to remember that you cannot buy bus tickets on the buses in Bucharest. You must buy them beforehand from the grey ticket offices that are close to some stops. At these ticket offices, you can only pay in cash and you have to pay for the price of the card and the journeys that you wish to take. Once you have got your ticket, you must validate it when you get on the bus by using the orange machines that are close to the bus doors. The bus card costs 1.60 lei and you can top it up by any amount you wish. A daily ticket costs 8 lei on urban lines and 7 lei per journey on the express lines that connect the airport to the city centre as its shown in Bucharest bus map.

Routes in the 400-499 range service localities outside of the Municipality of Bucharest (in the surrounding Ilfov County). They have a different fare structure to urban routes, ranging from 1.20 lei to 3.00 lei per trip, depending on route and distance as its mentioned in Bucharest bus map. No service is currently wheelchair accessible. Lines designated with 600-699 numbers are considered shuttle or special lines. With the exception of 601, all other lines are operated on a temporary basis, as replacements for trams or trolleybuses during maintenance and modernization work, as a form of temporary bustitution . Their number is 6 followed by the number of the substituted tram / trolleybus. Season passes valid for the substituted tram or trolleybus are valid for the shuttle that replaced it. In the mid 1990s there were 7 express lines, all terminating at Piaţa Romană . Since, they have been removed or converted in standard bus lines, with the sole exception of the Airport Express (783). In January 2009, a new express route 780 was inaugurated. One trip is 4.5 lei using the pay as you go Activ card. 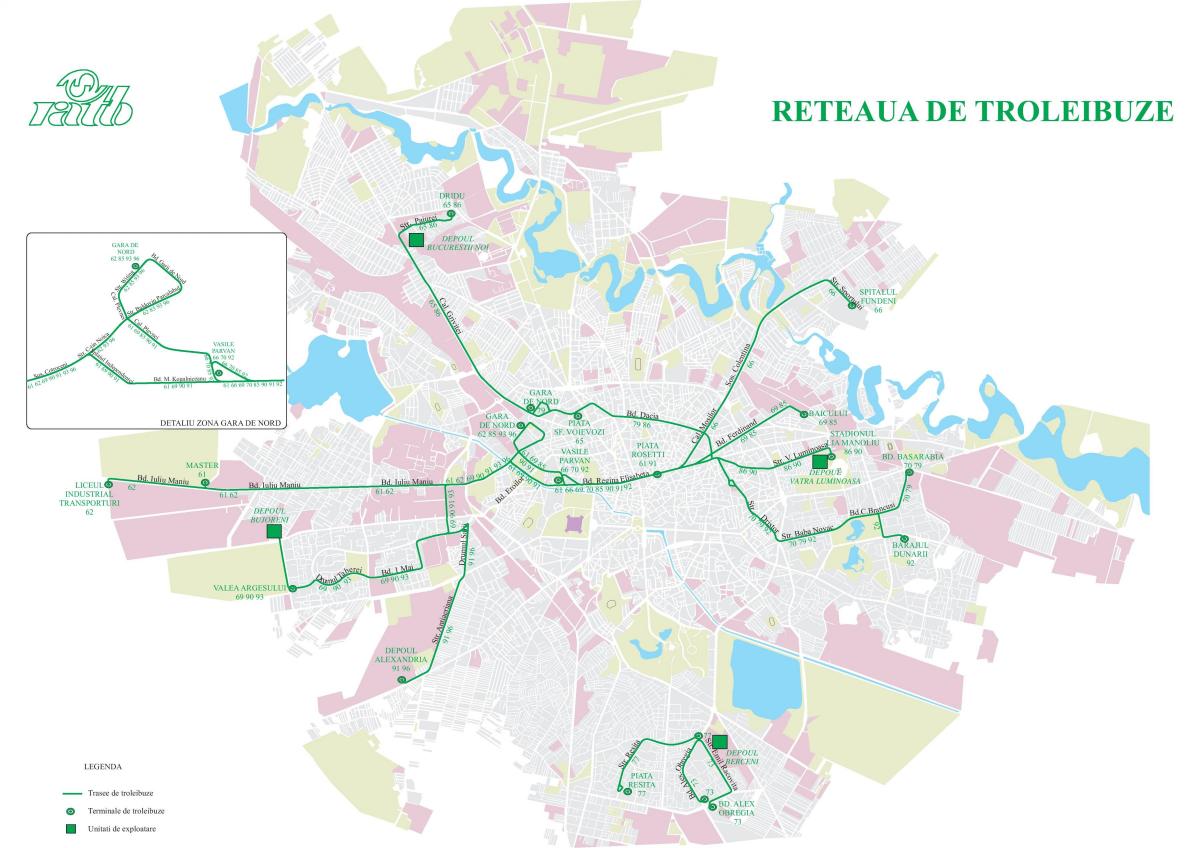 Trolleybuses supplement buses on the RATB system network, which operates 19 trolleybus lines (mainly on high-usage routes), measuring 164.1 km (102.0 mi) of routes on 73.2 km (45.5 mi) network as you can see in Bucharest trolley map. During the 1990s, the fleet was updated with modern trolleybuses manufactured by Ikarus , in light blue and yellow livery, which have acoustic station announcements and digital display screens. These trolleybuses now make up the majority of the fleet. In early 2007, 150 wheelchair-accessible Irisbus Citelis trolleybuses were introduced on routes 61 , 62 , 69 , 70 ,71 , 86 , 90 , 91 and 92 . Two distinct, non-interconnected networks exist in Bucharest, the main network (comprising the two main East-West lines as well as a spur in the Northern part of town) and a relatively small Southern network in Berceni.

Each of the two Bucharest trolley networks have their own, separate trolleybus depots (including separate fleets) and are not connected in any way. The trolleybus network is currently being overhauled or expanded - a goal is to eventually unite the two networks. With this goal in mind, in 2008, a new segment of overhead wire was opened between Piața Unirii - Calea Vitan - Piața Sudului as its shown in Bucharest trolley map, which is to be expanded in the future to Piața Rosetti, thus bridging the existing gap. Trolleybuses come and go pretty often but can be crowded, especially during the rush hours (07:00-09:00 AM, 06:00-08:00 PM). All of the Bucharest STB buses and trolleybuses have a door (the middle one) where a trap can facilitate wheelchair access; for that, you need ask the driver so as to wait until you are done; it is worth noting that it is faster to ask fellow passengers for a lift, as the bus floor is rather low anyway.

Trolleybus drivers are not entitled to sell cards and disregarding of the reason for your not validating your card (running out of credit, forgetting, the bus is too crowded etc.), you will be fined if an inspector finds you without a valid / validated card. Passes are a good idea if you plan on using public transport twice a day or plan on traveling frequently for a few days or more. A one day pass valid on all ground transport except for express lines can also be bought via SMS: text letter A to number 7458. For the express lines to the airport, text E782, E783 or E784 (according to the bus you are getting on) to number 7458 as its mentioned in Bucharest trolley map.