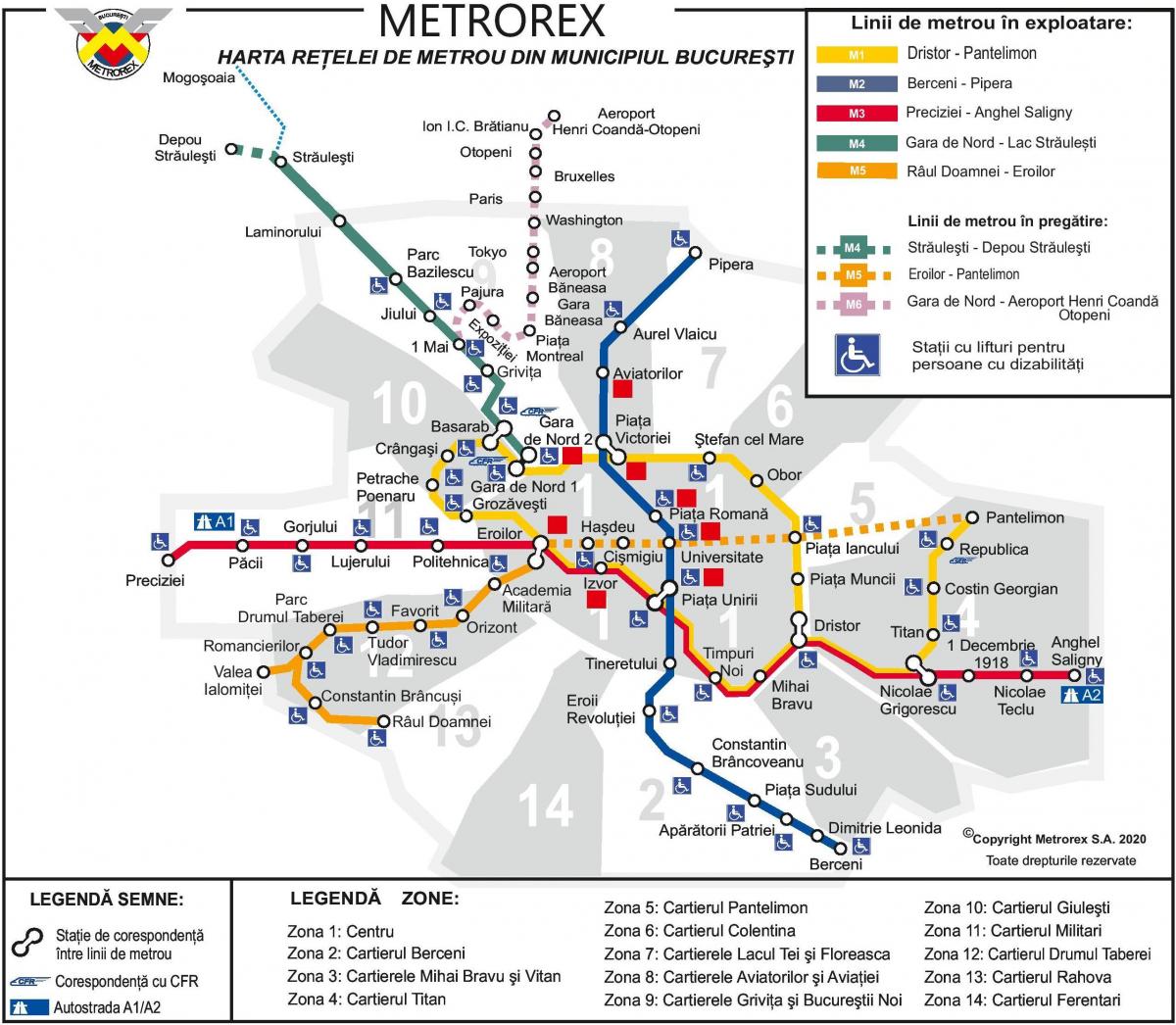 The Bucharest Metro (Romanian: Metroul București) is an underground urban railway network that serves the capital of Romania, Bucharest. The network is run by Metrorex. It is one of the most accessed systems of the Bucharest public transport network with a ridership of 177.23 million passengers in 2010 (averaging out at 485,000 passengers per day). In total, the network is 69.25 km long and has 51 stations as you can see in Metro map Bucharest. The earliest plans for a Bucharest Metro were drafted in the late 1930s, alongside the general plans for urban modernization of the city. In 1938, the local authorities assigned the task of planning and constructing the subway system to S.A. Metropolitanul, with work scheduled to start in March 1941. The outbreak of World War II, followed by periods of political tensions culminating with the installation of communism, put an end to the plans.

The Bucharest Metro uses two types of trainsets: Astra IVA - 33 trains (198 modular cars), built in Arad between 1976 and 1992; Bombardier Movia 346 - 44 trainsets (264 cars), built in 2002-2008. The Astra trains used on the system are made up of various trainsets (rame) connected together. Each trainset is made up of two permanently-connected train-cars (B'B'-B'B' formation) that can only be run together. On lines M1 and M3, three trainsets (totaling six cars) are connected together, with a length of up to 120 meters, while in line M4, two trainsets run together (totaling four cars) as its mentioned in Metro map Bucharest. M2 only uses Bombardier Trains. The ASTRA Arad rolling stock was built between 1976 and 1992, and is approaching the end of its service life, so it is currently being either refurbished or phased out. 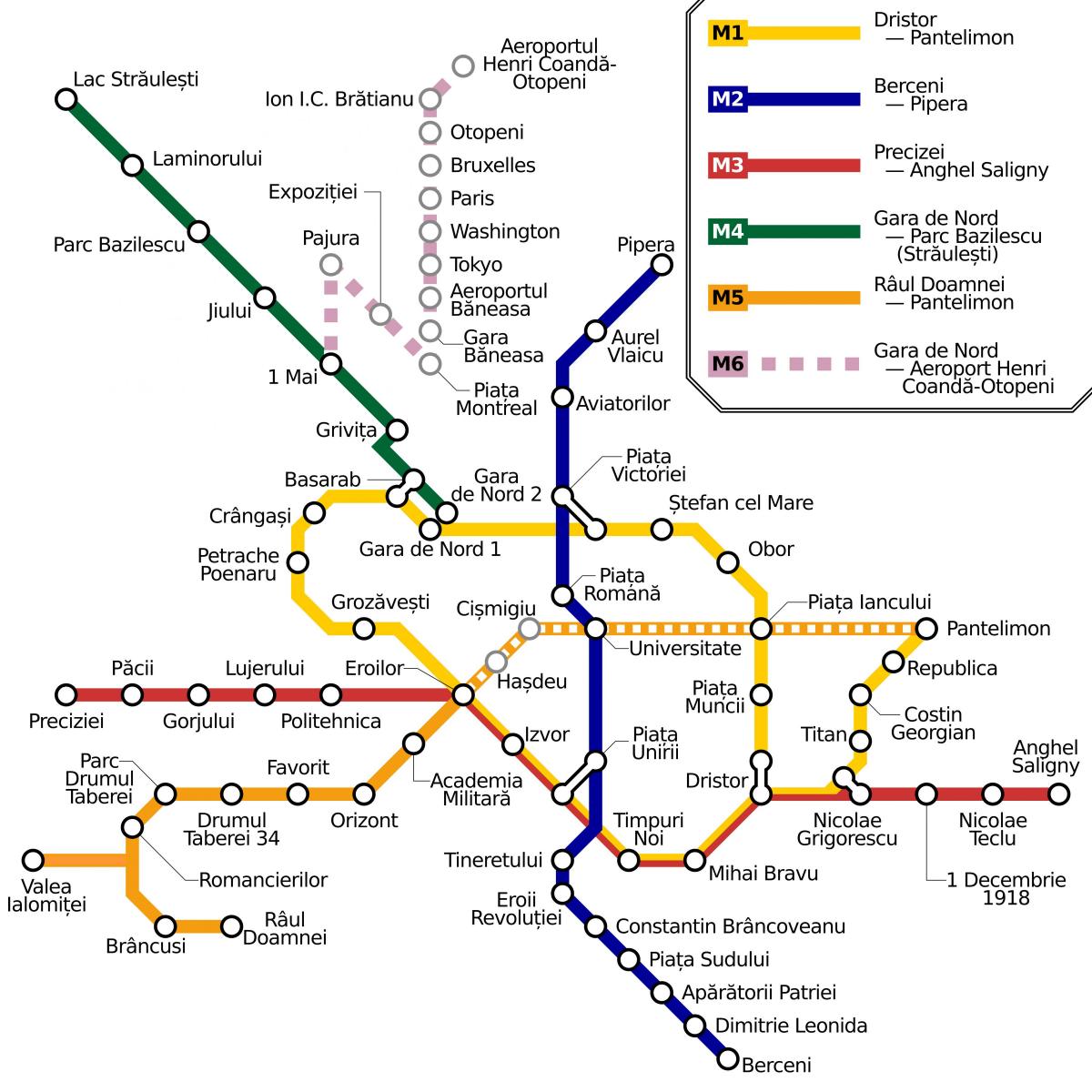 As of 2010, the entire Bucharest subway runs underground, except for a short stretch between Dimitrie Leonida and Berceni stations on the southern end of M2 line. The network is served by four depots, 2 being located above ground (IMGB and Industriilor) and two underground (Ciurel and Pantelimon) and by additional smaller works at Gara de Nord and Eroilor stations as you can see in Bucharest subway map. There are two connections between the Metro network and the Romanian Railways network, one at IMGB (connecting to the Bucharest Belt Ring), the other at Ciurel (connecting via an underground passage to the Cotroceni-Militari industrial railway). The latter connection however is unused and mothballed. The metro network and the national rail network share the same gauge (1,435 mm) and loading gauge but not the same electrification system (the metro uses 750 V DC whereas the Romanian Railways use 25,000 V 50 Hz AC) making it possible for new metro cars to be transported cross country as unpowered railway cars.

The subway livery for Bucharest is either white with two yellow or red horizontal stripes below the window for ASTRA trains, or stainless steel with black and white for the Bombardier trains. All trains run on 750 V DC a third rail, or an overhead wire in maintenance areas where a third rail would not be safe. Maximum speed on the system is 80 km/h (50 mph), although plans are to increase it to 100 km/h (60 mph) on M5, a new line currently under construction as its mentioned in Bucharest subway map. Bucharest is the only city in Romania with a subway/metro. There are four underground lines in the city: from north to south (M2-blue), from east to west (M3-red), a circular route (M1-yellow), and an exclusively northern route, from 1Mai Station to Gara de Nord (M4-green). The stations are quite clean and well positioned around the city, each with a different design. To use the subway, you will have to buy a magnetic subway card from the offices at the stations. You can get a card valid for either two rides, ten rides, or a monthly card. The subway is open from 5am until 11pm. Check the underground map for routes and stops.

Passenger transport in Bucharest is also provided by the subway network, which is among the most used public transport systems. The network consists of four lines: M1, M2, M3, M4, M5. In total, the system has 77 km length and 63 stations, with an average distance of 1.5 km between stations as its shown in Bucharest subway map. The route map can be found on metrorex.ro, subway website, but also explanatory maps are conveniently shown in the subway stations and even in the trains themselves. The use of the subway system in Bucharest is based on a magnetic card, which can be purchased from the subway stations, which entitles either a fixed number of trips over a longer period or to an unlimited number of trips per one fixed period. Magnetic cards for subway access cannot be used for the journey with the means of public transport to the surface. The access of the passengers to the subway stations is between 5.00 and 23.30, trains with a frequency of 5 to 15 minutes depending on the hours.