You can find on this page the Bucharest tram map to print and to download in PDF. The Bucharest trams map presents the network, zones, stations and different lines of the tramway of Bucharest in Romania.
The ticket sale points are all around Bucharest, chiefly or at nearby stations (see Bucharest tram map). You can charge the card itself with any amount between 2.6 lei and 50 lei then use it each time you ride a Tram. 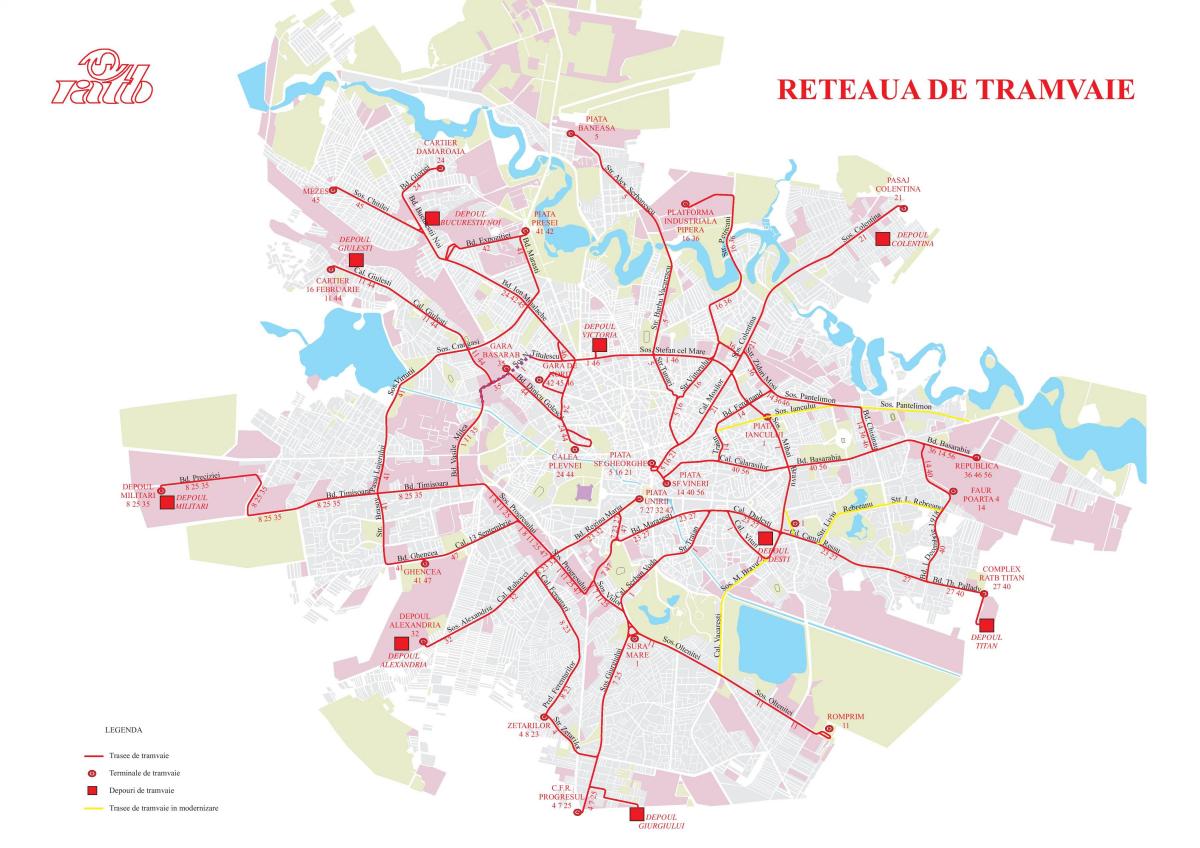 RATB operates a complex system of trams measuring 332.2 km (206.4 mi) of routes on 145 km (90 mi) tram network throughout Bucharest. Beside 21 tram lines, there are currently three converted light rail lines (so called metrou uşorwhich translates as light metro), numbered 32, 35 and 41, all of which run in the western part of Bucharest as you can see in Bucharest tram map. Light rail use upgraded trams and also run on separate designated corridors for faster travel times. Most of the tramway infrastructure in Bucharest has either been overhauled or completely upgraded in the last 5 years, or is currently being overhauled. The light rail service is expected to be expanded by upgrading existing tram lines to light rail status.

Most tramways operated by RATB (all V3A, Bucur 1 and Bucur LF models) are manufactured internally by RATB at their subsidiary URAC Bucharest (the same subsidiary also handles tramway repairs and is in charge with scrapping vehicles reaching the end of their useful service life) . Currently, URAC produces three models for RATB - two three-segment, partially low-floor, wheelchair accessible models (V3A-CH-PPC derived from the earlier V3A-93 model and the all-new Bucur-LF model) as well as a two-segments, non-wheelchair accessible model (Bucur 1), derived from the older Tatra tramways. Route 41 is currently the only route that is wheelchair accessible, using new V3A-CH-PPC tramways as its shown in Bucharest tram map. Other routes will become wheelchair accessible as soon as more V3A-CH-PPC or Bucur-LF vehicles are constructed (URAC building capacity is quite limited in that respect).

Bucharest has hundreds of bus and trolleybus routes, and tens of trams, serving every part of the city as well as a number of suburban villages and outposts. Buses and trams run at infrequent intervals from very early in the morning (around 04:30) to around 22:50 (earlier at weekends), after which the night buses take over. These serve all areas of the capital throughout the night, with all routes departing from Piata Unirii. Most night bus lines run at hourly intervals. In Bucharest, surface transport includes an extensive bus system, trolleybuses, trams, and an easy subway line. The transport network is among the densest in Europe, ensuring the transport of millions of travelers by making them available more than 116 bus lines, 20 trolleybus lines and 25 tram lines as its mentioned in Bucharest tram map, including the light rail.